Myanmar or Burma is a county with population of 55 million. The area of country is 676,577 sq km and second largest in Southeast Asia. It is world’s 40th largest country. It has five neighbour countries and is bordered by Laos, Thailand, Bangladesh and sandwiched between the two big countries of India and China .

Myanmar is home to 135 different ethnic groups .The country is rich with mineral resources and have a lot of mountains, rivers, lakes and sea and it is given a favor by the God. Ruyard Kipling prophesied that “This is Burma and it will be quite unlike any land you know about”.

Myanmar is very differ to any other country for more than a century year. “What our guests remarks to us is that after travelling throughout many counties in Southeast Asia, Myanmar tourism is natural and leads most some other countries by far….”. Yangon was capital until 2005 and it is home to Shwedagon Pagoda. The administrative capital of Myanmar was officially moved to Nay Pyi Daw approximately 320km north of Yangon. Yangon was founded by King Alaungpaya and he changed the name from “Dagon” to “Yangon” after conquering lower Myanmar in 1755.

Yangon means “End of Strife”. Later, Yangon has become a model city by the British, the new master Fraser of Engineering Corps, who had also made the grand plan of Singapore. Mawlamyaing is the capital city of Mon State and is Myanmar’s 3rd largest city. It is a lovely town by the Thanlwin River. Old colonial buildings, churches are still remaining and dotted everywhere in town. Sunset on O’Moulmein Pagoda is amazing and it is the place Ruyard Kipling wrote the poem ”On the Road to Mandalay “. Boat trip to Ogres Island and river trip between Mawlamyaing and Pha an are unforgettable experiences. 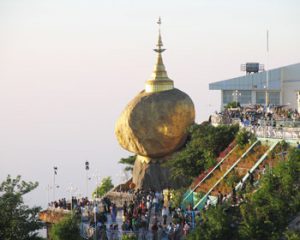 Golden Rock Pagoda( Locally called Kyaikhtiyo) is one of the main pilgrimage sites in Myanmar. 160 km far from Yangon, Golden Pagoda is set on the top of huge granite boulder and unbelievably stands on the top of Mt.Kyaikhtiyo an altitude 1100 meter above sea level. It is cold on the Pagoda and visitors need to bring a warm clothes. The visitors who are planning to stay at the hotel near by the Pagoda should carry only a small bag as is not easy to carry up your baggage along the steep road. Mandalay was founded by King Mindon in 1857. It was the last royal Myanmar Kingdom until 1885. The second largest city in Myanmar with a population 1,000,000 and it is considered the cultural city of Myanmar. Mandalay is also called Yatanapon which is means “Pile of Gems “ or “Pile of Jewels”. The surface of the city is as flat as surface of drum. The city was systemically built and the streets in Mandalay are straight and parallel which make block and easily to find an address. Sagaing, Minguin, Inwa(Ava) and Amarapura are interesting tour sites near by Mandalay. Monywa is a city in Sagaing Division , located 136 km northwest of Mandalay on the eastern bank of the River Chindwin. It is reached by car from Mandalay via Sagaing and takes approximately for about 4 hrs. Monywa is a major region for trading and for agricultural product nearby. Thanboddhay Pagoda, Bodhi Tataung, 129 meters height of Laykyunsetkyar standing Buddha Statute are very attractive places in Monywa. Hpo Win Taung cave complex across Chindwin River is a highlight of Monywa. 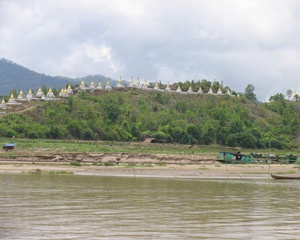 Homalin is an isolated town on Chindwin river .It is a small quiet town in North West of Myanmar and a capital of Homalin Township in Sagaing Division. The town has an airport and links with Chindwin River from Homalin to Monywa. There are some villages where the Naga hilltribes live a few kilometers away from Homalin up Chindwin river. The scenery and the life of people along the river are unspoiled and beautiful .A boat trip and Kayaking trip along the river are photographer’s dreams. 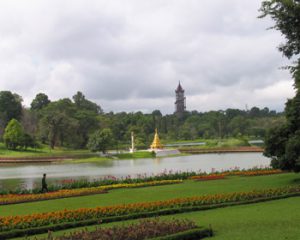 Pyin Oo Lwin is a lovely hill station town with elevation of 1050m above sea level .It is cool the year around and known as a summer resort. It is 67 km east of Mandalay and approximately take about 1 1/2 hrs by car and situated on the road to China. The town is beautiful and lush with green trees and flowering plants and gardens .The Candacraig former British Club can still visible. Exploring by stage coaches to a colonial head quarter and botanical gardens are truly memorable. Don’t miss it! 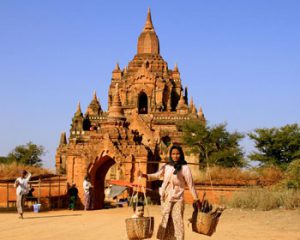 The name Bagan is derived from Pyugama (which means Pyu village) and later the name changed from “Pyugam to Bagan”. It is one of the riches archaeological sites in Asia .It is dotted with around 3000 of Buddhist monuments within 42 sq km. The Buddhist monuments were built between 11th to 13th Century after King Anawrahta introduced Theravada Buddhism to Bagan in 1044 AD. Bagan was declined by Mongo at the end of 13th Century. It is a must see to view the flood lit temples in the archaeological sites. The name Mt.Popa is derived from Pali (sanscript) which means Flower. It is abode of the Nats(spirits).It is old extinct volcano mountain with an altitude of 1500 meters above sea level The soils are very fertile because of volcano ashes that keep the region green the whole year around and also is called the Oasis of Dry zone. A day trip from Bagan to Mt. Popa within 65km can give you good experience of rural life . Inle Lake is a photographer dreams and situated in Nyaung Shwe township in Southern Shan State . Its calms water are dotted with fishing canoes and hydroponic farms. It is the home to the Innthas. It is stretching out 22 km for north to South 11 km wide. The market on Inle lake are on a rotation system and held every fifth day market. They are colorful markets and draws people of Shans , Innthars, Paohs, taungyoe, etc…There are many potential things to do on the lake and around the lake such as boat trip, canoeing, biking, trekking and so on. Pinadaya, Kalaw , Taunggyi, Kakku are also fascinating places nearby Inle region. 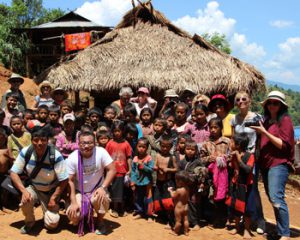 Kyaing Tong is situated in eastern Shan State. The former eastern Shan Chief was posted here before 1962. There are many diversity ethnics groups in the region such Shan, Akhar, Larhu, Enn, Palaung and others groups. It can be accessible only by a plane flight. Kyaing Tong is a popular place for trekking to see pristine life styles of the hill tribe people. 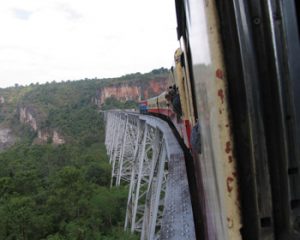 Hsibaw was an ancient Shan’s Kingdom and it is situated on the road to China. This sleepy town on Duttawaddy River is a home to Shan, Palaung and Lishaw peoples. Day trek and overnight trek to Shan and Palaung villages are unforgettable adventures. Myitkyina is the capital city of Kachin State in Northen Myanmar. Maykha and Malikha Rivers confluence is formed as a majestic Ayeyarwaddy River and is situated 27 miles (43km ) from Capital of Kachin State. Kachin, Lahu, Rawan and Lishaw are major ethnic group of the area. It can be accessible daily from Mandalay by air and rail. The Annual State National Day is celebrated at every 10.January. Putao in Kachin State is a famous for real hikers and nature lovers.

Bamaw is situated in Kachin State on the Ayeyarwaddy River. It is old trading port town. Population is about 70,000 people and mainly Kachin, Shan and Burmese live together in town. A river journey from Bamaw to Mandalay offers scenic beauty of countryside and the life of people live along the river. Sittwe(Sittway) is a capital of Rakine State main gateway to ancient Kingdom of Mrauk U. Lots of seafood products can be found in Sittwe.

Mrauk U is ancient archaeological sites in Myanmar. It can be accessible by boat from Sittwe along the Kaladan River for about 5 hrs. Once Mrauk U was at its peak from 1430 from 1785. This ancient kingdom is adorned with ruins, pagodas and a local culture as well as Chin tribal villages and it is truly a remote virgin land. There are a world quality beaches in Myanmar and among them Ngapali beach, Ngwe saung beach and Chaung tha beach are unspoiled beaches and popular among the visitors. There are also many good resorts at these beaches.